The World’s Most Dangerous Airport & A “2-Hour” Trek

The morning started off with the normal chaos of bringing down bags and trying to load them into the vans and cars to take us to the airport. We had a small breakfast (all but me as I have been suffering from some stomach issues the last few days). We were off to the airport through the busy streets of Kathmandu- there were cars and kids everywhere at 6:30 in the morning. I was surprised at first as it was Sunday, but was informed that Friday and Saturday is the weekend in Nepal. As we travelled the streets the amount of rubble was astonishing. It appears as though the city is in a constant state of brick recycling. The piles of bricks were everywhere. We had a few slow moments with the odd cow on the street but made it to the airport unharmed. More chaos! Running to the check-in point, getting our bags from guys who carried them from the van (of course wanting a tip), checking the bags through security (although I’m quite sure no one looked at the screen). The chaos continued as we had to pay an airport tax, get our tickets and then go through another check point. Somehow it all works! 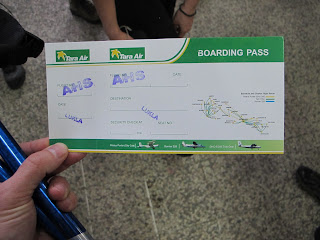 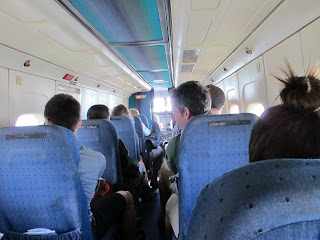 We got on the bus to bring us to the plane and then were told that Kathmandu tower had no power (quite common and we had been told that this may happen). So, we waited for about 30 minutes before we could get on the plane. It was a 15ish passenger plane, but looked sturdy enough. Once on board it didn’t take long to get in the air an off to our destination (Lukla- 2800 m) and the World’s most dangerous airport. The runway starts at the edge of a huge cliff and then runs uphill into a mountain, so the pilots have to be on their game and the weather has to be good. Luckily we had great weather. 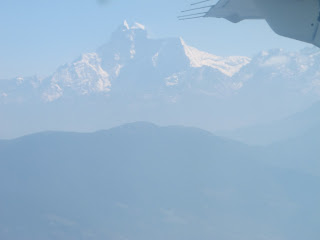 
The flight in was a little bumpy, but the views out the left of the plane (unfortunately I was on the right) were incredible. It was the first views of the Himalaya and the mountains live up to their legend. The view out the right wasn’t so bad, but it was of the foothills seemingly 50 ft away from the plane! Our landing was quite uneventful as we had good weather. The airport at Lukla is just as crazy as Kathmandu, but our Sherpa guides found us right away. 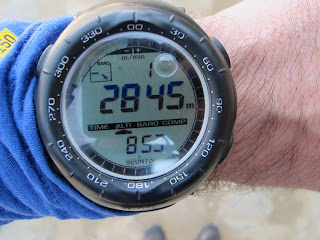 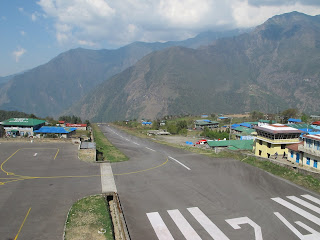 Looking downhill down the runway

We’re lucky to have Keith Burgess and his daughter Katie with us as they’ve been to Nepal a few times and have used these particular Sherpas in the past, so they recognized Katie right away. We had to wait about 15 minutes for the other half of our group to arrive- Phil didn’t look so good getting off of the plane. He has some history with bad flights and really hates this trip, but he made it. We gathered our group together and headed off to a teahouse for some tea while our porters took care of our baggage. 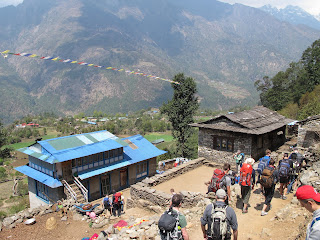 The tea was great, but I was still a bit weak in the stomach, so didn’t enjoy too much. I bought a couple of chocolate bars as I thought I might get hungry on the trek, as I hadn’t eaten and then we were off. Our baggage would follow behind on Zopke (I think that’s how you spell it- a cross between a yak and a cow). We started by going down hill (never a good sign when your destination is higher than your starting point) and moved along at a leisurely pace. I was quite curious as to how my stomach, fitness, knee (I have a torn ACL and recent meniscus repair) would hold up. Well, today the fitness and the knee did okay, but the stomach failed me. Phil, our fearless leader said that it was about a 2-hr trek to our destination (Monjo), but as usual he was totally wrong. 2 hrs later we found ourselves stopping for lunch! 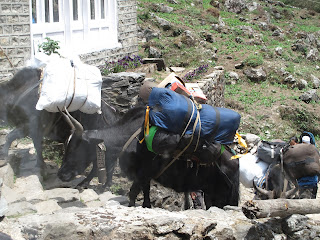 Zopke's carrying our gear as we eat lunch

I was okay up to this point, staying in the middle of the group. I managed to eat some rice and pasta and drink some orange tea (think warm Tang) and then we were off again. Another 3 hrs of trekking ahead of us! Again, I started off well, but that slowly changed. My stomach started to turn and grumble and just wasn’t happy. This was followed by some heartburn like symptoms. So, I slowed down and was eventually met by Keith (the man with the drugs), Ike (he was in much worse shape than me- GI distress beyond belief) and a few others. They dutifully escorted me in, Keith gave me some drugs and I was asleep by 4:00. I woke up at 9:00 to have some water, but was still feeling it. The morning brought a bit of relief, but it didn’t last very long either (more on that later). I wish I was able to have dinner and socialize, but better to start feeling better. 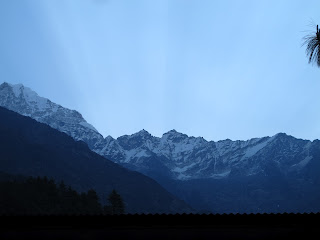 The view from the Monju guesthouse in the morning

A little aside-
We have the most amazing and humble Sherpa guides. Lowang is the leader and is the father of a bunch of the younger assistant guides. Nima (means Sun) is one of Lowang’s sons. He is 28, a genuinely friendly guy and a machine. He sings and dances and runs up the trails. He has this personality that reminds me of my friend Fraser Charles (Fras’ quote is “Greg, I’ll go climbing with you anytime, cause climbing is just SO FUN). It seems like Nima is just enjoying life. I asked him if he’s been up Everest and he said just once. When I asked him if it was hard he said “Not really”, but his body langue said “piece of cake”. I think he was trying to be humble. The other guides are just as helpful and happy. They’ve done a better job of remembering our names than I’ve been able to do of theirs and there are 23 of us and only 5 of them! It’s really incredible to see these guys do things with no effort, but most of them were born at 4200 m, so we are quite low for them.