Woke up feeling ok. Still a bit weak, but ready to tackle the day; although a little worried as I’d heard that this was the hardest day. We started out in a valley going along a river (at some point I’ll figure out which one!). I was doing well on the flats, and started well on the climb. The Namche climb is a famous for being a tough day. 600 m over a relatively short distance (was going to write time, but it took me a long time and others a short time!).

I was going quite well with Sam and Nema (our happy guide) and then Sam and I got separated from Nema (I think some Donkeys got between us). 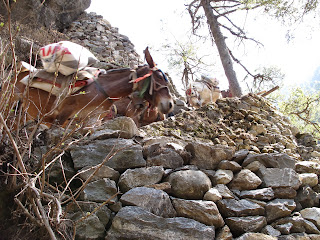 All of a sudden Nema was way up the hill from us waiving down (still smiling of course). I later found out that he ran up a shortcut that pretty much went straight up the hill rather than using the switchbacks. A little later on Sam and I got separated (again donkeys- those things move really fast on the straights, but go slow on the corners and Sam beat them up a corner). I was still feeling ok, but slowing my pace a little as was starting to feel it in the knee. 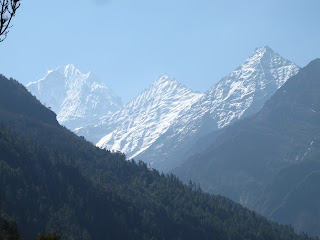 I was soon met by Kate, Katie, Jon, Trevor and Keith, so we stayed as a group for a while. Trev and I were off the back a little, just moving a bit slower. We regrouped at the Mt. Everest lookout and snapped a bunch of photos, drank some juice, ate an orange and bought some water (may have been a mistake). I stayed a little longer than the rest as I was really starting to feel it in my knee (had done about an hour and a half of stairs by this time). I’m sure part of our group had arrived at Namche by now, but as hard as it is, I was trying not to let that bother me! My colleague Wendy Wheeler often says Human Kinetics is about uniforms and trophies and I haven’t earned either on this trip yet! Needless to say my pride is taking a beating along with my body. I carried on at a snails pace, the plan was rest on the switchbacks, but those soon disappeared, so it became rest under the shade of big trees! I caught Trevor soon after and the two of us stumbled into Namche together. My right leg cramping up as I had taken a lot of the weight with each step, so as not to irritate the knee. I got in feeling awful. Another bit of the stomach issue. Again, a combination of effort, not so good water and fruit juice. So, threw up a few times, had a nap and felt much better (aside from a minor headache- I wasn’t allowed to take drugs as I had to have my neck vessels scanned and didn’t want to affect that measure). I was scanned shortly before dinner. One of the measures that we are taking is the oxygen saturation in our blood. Basically it’s a measure of how much oxygen we have in our blood. At sea-level (Kelowna) this number is about 98 (out of 100). Mine today was 82! No wonder I’m struggling. If we were doing a test in the lab back home, we’d be closing in on stopping it based on that number! Things don’t bode well for me at 5000 m at this point. One of the ways the body combats this drop in saturation is by increasing ventilation (known as the hypoxic ventilatory response). Mine doesn’t seem to have kicked in very well! Hopefully it comes up tomorrow. We tested Nima’s and it’s around 98! Like I’ve said before, those Sherpa’s are amazing! 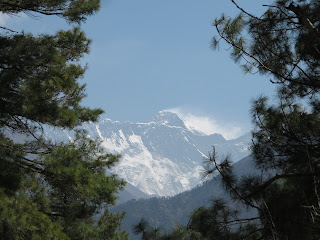 The first view of Everest

We are staying at an amazing guest house up on the side of the hill in Namche Bazar at 3450 m. The village is steeply tiered in the shape of a horseshoe. At the open end of the horseshoe is a 6500 m peak (Kongde). It’s an incredible site. The hosts have treated us to amazing food and tea. Our dinner was steak and potatoes, veggies and noodles. They also made a “Welcome Back” cake for Keith as he stays here every time he comes. We are truly blessed. A bit of light reading and off to bed.
Posted by Greg at 04:07