FRIENDS FROM AROUND THE WORLD

Shortly after writing yesterday’s post I finished up the cognitive function testing. Phil and my room has become the lab in Kathmandu, so there is equipment everywhere. For the cognitive testing you wear a swim cap with electrodes on it that measure brain activity. You are then exposed to some varying stimuli. In this case it was images of faces and cars that appear on the computer screen in what is best described as television snow, you know, when your cable goes out (before the time of digital television where the t.v. just says signal lost). The snow changes images every half a second or so and then one image stays on the screen for longer (either a car or a face) at this point you have to press the corresponding key (j for face and k for car, I was really hoping for f for face and k for car- opposite sides of the keyboard and maybe easier). It’s a different experience to have to concentrate like that and I know I’m going to be terrible at it, and it will get worse at higher altitudes as well. There were a couple of other tests, but no so bad. 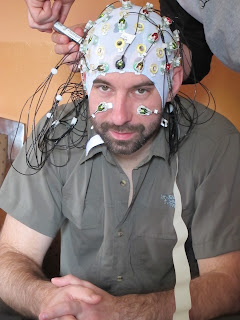 When I finished the test I headed down to the garden for some coffee and ran into Ike (one of the boys from Duke, who had arrived just an hour earlier) and then right after ran Akke from the Netherlands (she had some minor flight issues and arrived a day later than expected- thank God for the week in Kathmandu), so a few of us (Glen, Echo Mike, myself) decided to take them out for a wander and to pick up some gear. Akke is on point when it comes to bartering. She managed a down jacket and pants for a great price. The guy told her 4500 for the jacket and 2500 for the pants. She said 5000 for both and held strong… he kept saying 6500, Akke- 5000; 6000, Akke- 5000 and on and on. Eventually he said 5100, Akke- 5000! Ok, now you robbed me he said! Brilliant. Ike on the other hand, not so good. We went into a little shop and came out to find him playing a violin that a street vendor had… this is big trouble, as they follow you for blocks. We kept telling Ike to send him away, but he’s just too nice. Eventually the guy asked for 1 rupee, but we convinced Ike to stand his ground! 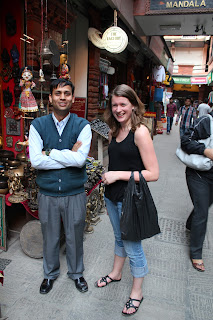 One of the shop keepers that Akke took to task!

We came back to the Guesthouse to drop our gear and promptly ran into the New Zealand boys & girl (Sam, Jim & Kate). I had a coffee (they make great coffee at the guest house) and we caught up on family, travel and work news. Akke and Kate wanted to do a bit more touring about, so I decided I’d go with. Great idea! We took the long way around the streets and saw the start of rush hour traffic on one of the busier roads… Madness! Cars everywhere, motorbikes everywhere and some brave traffic cops with whistles trying to make it work. Happy to say that it does, but it’s crazy. 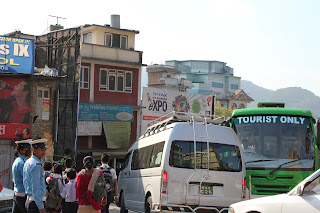 These pictures don't quite do it justice, but I think you can get the idea! 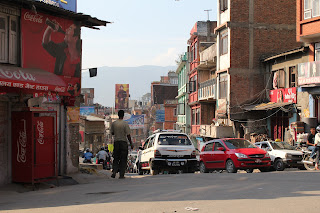 We then continued down the street and came upon the butcher and fish market. The butcher is a shop door that empties out into the street. The guy just cuts the meat in the street on a table- flies everywhere, the meat has this odd brown colour and the smell is incredible. The fishmonger was across the street with all his fish piled up on a little table. It was 20 above and it looked like they had been sitting there all day. Nuts! 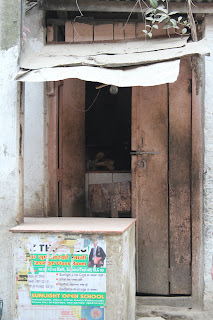 If you look in the doorway you can see some of the bones that had been butchered the day before. 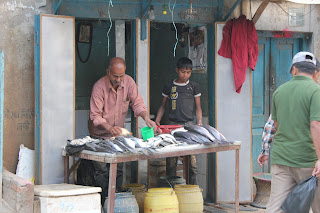 The Fishmonger and his son

We then headed around the corner right into the middle of a Nepalese movie! Now, the best we could figure was that it was either a music video or the singing part of a Bollywood style movie! The singer/actor’s name was Radesh (I think) and it was crazy! He walked down the street with his face in the camera lip syncing and dancing. There was the film crew, complete with sound guy- this little kid had a battery pack on his belt along with a tape player or CD player and, the best part, around his neck was a HOME STEREO SPEAKER (it was huge- my brother-in-law would be proud). He walked backwards in front of the camera with the music blasting. Radesh also had his entourage, complete with the girl in the red dress! The shop owners were amused and the younger people in the street kept telling us that he was very famous. 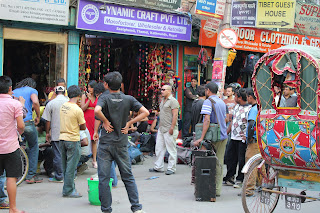 Radesh and his entourage. I think he looks like a Nepalese Pitbull.

Kate was just looking and Akke did some more bartering. She was after some kind of board game called Goats and Tigers and had the shop owner chasing her down the street trying to sell. Needless to say, she got a great deal! We made it back to the Guesthouse to find more additions to the crew. Dave McLeod (the most important man on the trip- he’s the anesthetist that is putting in out neck lines) and his son Nicholas had arrived as well. Everyone was gathered outside our room going through the equipment. Another reorganization and repacking as the trekking company was coming to pick it up and start the equipment’s journey. We’ve kept a bunch of stuff out to do some experiments over the next few days, but things are moving along nicely (Phil’s stress levels have dropped immensely over the last few days). 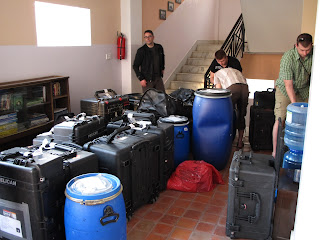 Another afternoon of sorting gear!

A nice dinner, a few beers, some good conversation, then off to bed.
Posted by Greg at 22:32