The Kathmandu Guest House is a haven. It has an immaculate garden and the staff have been incredible right from the start. Again, we arrived quite late and had to deal with the cases, but we got to bed at a reasonable time. Phil and I have a large room with 3 beds and we crashed hard. Neither of us moved until 10:30 the next morning! Once up he headed down for a shave and haircut (I think I’ll go today) and I took care of some work and called Colleen (working on gaining good husband points). We then headed down for a buffet breakfast and catch up with Binod (the owner of Mountain Tiger) to arrange some more of the logistics. He’s an amazing help and has some great stories, so I can understand why Phil keeps using him. 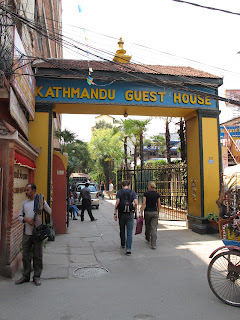 Phil and I then went exploring and to buy a few things. This is a shopper’s dream. Stores everywhere selling everything and all at incredible prices (if you’re willing to negotiate). Our first task was sunglasses for Phil and pants and a shirt for me. A couple of back and forth’s got us what we were after. It’s a bit of a hard thing for me to bargain back and forth too much. Not because I don’t want a deal (of course I want a deal), but the difference between 1600 rupies ($20) and 1000 rupies ($12.50) really isn’t too much for me, but is huge here. Don’t get me wrong, I’ll never pay the initial cost and I had a good chat with a young guy who is running a shop and he gave me some tips and things to pay attention to as you’re bargaining (Colleen wants to get a new car when I get home, so this is some good practice!). We continued on our way looking for a few more things and we went into another shop to look for a bag (a waterproof bag). They guy was trying to get me on a shirt and wouldn’t budge, so I said to do me a deal on a bag and a shirt. He was trying to convince me that this bag was waterproof, so he poured water all over it with this confident look on his face. When we opened the bag, everything was soaked inside! He was beside himself and I got a better deal on the shirt! Phil told him to say the bags are windproof from now on! Too funny. 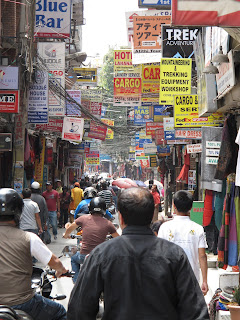 As we walked down the street Phil pointed out the electrical situation. My electrician brother-in-law would flip. It’s a mess. Line over line, splices everywhere, exposed copper wire. Combine that with the broken down streets and buildings and you really get a sense that the focus is the short-term fix and to survive until tomorrow and then worry about the next problem. Now that might be romanticizing it a little, because most people are in great spirits, but it is quite different. I’m not sure how the country stays glued together, but I’ve only seen a few streets, so really I’m not one to comment or judge. Hopefully today I’ll get out to see more. 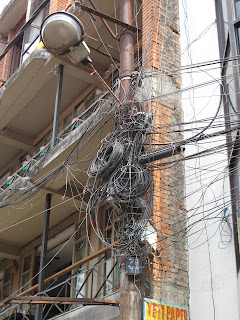 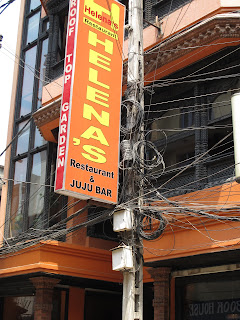 We had a great dinner of different curries at the Guesthouse (I’ll definitely find some good spices in a shop for my dad’s spice drawer) along with a few beers (my Nepalese weight-loss plan isn’t working out so well with all this beer consumption. It’s safer than the water is the excuse) and then called it quits quite early. “Echo” Mike Stembridge arrived from England, so he convinced a few of the boys to head out to a bar (I still heard how it went as they’re all still asleep), but I wanted to be up early to webcam with my girls, so didn’t go. I hit the pillow hard, but was wide-awake at 3:00. Phil snores (at least that’s what I’m telling him). We were both up and neither really fell back to sleep. So, today will bring a bit more shopping, a little catch up with some work and a nap. It’s also a research project, so I’ll be doing some cognitive function testing today as well.

We’ll live a slow life for a few more days while the rest of the group gets here and then things will pick up again. We start the trek on 29th, so a few days to get sorted and the like.
Posted by Greg at 19:40