Phil Ainslie (the Grand PooBah)- Science is his forte, logistics, not so much :) I must admit that he's handled the size and scope of this project quite well and has mobilized a group of top notch scientists, so that his only real contribution thus far has been holding the mouthpiece!

Nia Lewis- Phil's Postdoctoral Fellow. She's the one who really keeps this bus rolling. She's done all the organization and scheduling. She's collecting data and been a subject for every study and has even been on T.V. She's also played taxi driver for all of those who have arrived from other countries and continents.

Chris Willie- Chris is one of Phil's PhD students. I think his job will be to collect ultrasound data for all studies and to yell at me when I move around when I'm a subject. His "only" concern when collecting data is the quality of the data, so I'm expecting to get yelled at a bunch!

Kurt Smith- Kurt is another of Phil's PhD students. Another of the ultrasound crew. He's also a subject for a bunch of the studies. A big shout out to Kurt's wife Brianne for "allowing" him to come along as they just recently had another (3rd) baby girl.

Jon Smirl- The final member of Phil's student contingency. Another PhD student. He's a jack of all trades and was responsible for building a bunch of equipment. Another shout out to his wife as she is expecting in July, so will be handling a big chunk of the pregnancy without someone to lay blame to!

Gord Binstead- The Boss. Gord is the Dean of the Faculty Health & Social Development. He's involved in some of the brain & sleep studies. It's always good to have the Boss on a trip with you as he has the University credit card if something goes wrong. There was also talk of him trying to ride his bike up to and back down from the Pyramid.

Trevor Day- Trev is at Mount Royal University in Calgary. Trev is a respiratory physiologist and is driving a bunch of the hyperventilation studies (more to come on these later). He's a very well dressed fellow, so along with his student (Bike Mike) I think they will have an extra bag full of "product"

"Bike" Mike Timko- Trev's student and designer of the supine, adjustable bicycle that we are taking up with us. A well-designed and bullet-proof piece of equipment. We had a little trouble with the power output display at the start and he took the suggestion of increasing resistance by adding more hokey cards to the spokes (a very Canadian reference) in good stride. 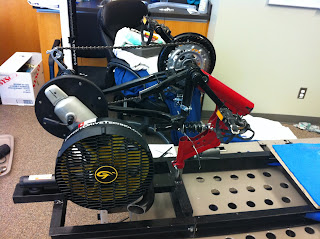 "Echo" Mike Stembridge- Echo Mike joins us from Cardiff, Wales. He's really good with the ultrasound probe, but not so good with the carbon monoxide (perhaps more to come on that later, but he did survive). He's choice in sport leaves a little to be desired- rugby on one side and field hockey on the other.

Glen Foster- Glen is a Postdoctoral Fellow in Bill Sheel's lab at UBC Vancouver. He's here in the Okanagan for the winter term to help with all aspects of the project. He puts in I.V.'s, injects the bubbles, and runs the gas forcing system. He says he's a search and rescue guy, so we'll see how he handles the big mountains!

Lauren Rey- Undergraduate slave, I mean student. She's been handling all the data analysis so far and it looks like she's doing a great job! She has the famous quote that she's "learned more as a volunteer in Phil's lab than she has in all of her classes put together"... to which we replied "You should pay more attention in class then!"

Akke Bakker- Akke comes from Universiteit Twente in the Netherlands. She spent the summer here last year doing some sort of international placement for her degree and landed in Phil's lab. She's on the ball and probably the toughest out of the crew! I love having her around as she brings back memories of the time I spent in Holland in my undergrad.

Keith Burgess- Keith is one of the medical doctors from Australia. He's been to the Pyramid before and his area of interest is in sleep apnea (amongst others). He jabbed all of the subjects during baseline testing. When I asked him about a formula for determining how much of a certain drug we should use he replied "let's just use my 30 years of experience"- good enough for me! But I won't really mention the bruised vein that I have 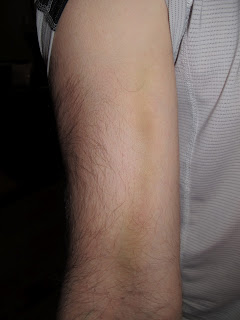 He said he was sorry... everyone else has questioned my manhood!

Kate Sprecher- Kate is the sleep tech. She hooked me up with a bunch of probes and wires and then asked me to go to sleep. Everyone asked me if I slept well, but I told them to ask Kate as she measured everything!

Sam Lucas- The first of the Kiwi group. Sam is a Postdoctoral Fellow at the University of Otago in New Zealand. He's involved in everything as well and has been up to the Pyramid before. A great guy (likes his skiing and beer) with a young family. So, a thanks to his family as I think he leaves on his son's birthday :(

Jim Cotter- Another 'hard' man from New Zealand. He's crazy fit and loves this ultra endurance stuff. I'm worried about having to try to keep up with him. Another great guy from the University of Otago. So far he's made me pee into a bucket a few times, breathe carbon monoxide and take blood from my ear repeatedly, but he's always done it with a smile. And not a bad skier either!

Joe Donnelly- Joe is a medical student from New Zealand. He was on the last expedition as well. To be honest I don't know what Joe does as all I ever see him doing is reading! Actually, he's running a bunch of the hyperventilation studies and doing some writing with Phil right now (hence the reading). Although I'm not sure if he's going to be a subject for many of the studies... something about his manhood (can you see the theme of having to be tough :)

Andy Lovering- Unfortunately Andy isn't able to join us on the mountain, but he has had a big role to play thus far. He's from the University of Oregon and his interest lies in pulmonary and cardiac shunt (this requires a long and complicated explanation, but it involves injecting bubbles into your arm and watching them go through your heart). Unfortunately in Canada, not too many people show bubbles and so we've bugged him about them being as common as unicorns. This is a poor attempt at a joke as no one outside of the lab will really understand it!

There are some more members of the team, but they haven't arrived yet. I'll add some more about them once I get to know them. The ones that I have met are top notch people. We're going to be doing some great science and we're going to have fun doing it. I'm pretty sure I can handle 5 weeks with this crew without wanting to "kill" any of them, but only time will tell!

I'll try to get some explanations, pictures and videos of the studies posted in the next few days.

Ainslie also talked me into doing a radio interview for Radio Canada International, which I'll be doing on Wednesday, so I'll post information on that when I know more.