I'd like to say that this is a post about the origins of Mt. Everest, but it's really about how I weaselled my way into an opportunity of a lifetime!

I was lucky enough to land a job at Okanagan College in Penticton B.C. about the same time another physiologist landed a job at the University of British Columbia Okanagan Campus in Kelowna. Phil Ainslie and I didn't know each other at the time, but Phil had done his Post-doc with a guy by the name of Marc Poulin who had done his PhD with David Cunningham at the University of Western Ontario. Now, my advisor at Western, Don Paterson, worked with David Cunningham and was also on Marc's advisory committee. So, if you play 6 degrees of separation, Phil and I are practically brothers.

Our program at Okanagan College is a 2 year diploma in Human Kinetics and most of our students have gone on to UBC Okanagan. So they have had the (dis)pleasure of having Phil as an instructor. This "feeder" mentality has given Phil and I an opportunity to become good friends and I'm quite sure he appreciates the effort I put in to preparing our students for transfer into the UBC program. We've also spent the last few summers climbing together, drinking beer and having the kids play (while we drink beer). So, again, practically brothers.

To add to the family theme, one of my groomsmen and the guy that I lived with while doing my MSc at the University of Alberta also landed a job here. So, Neil, Phil and I have had even more opportunities to talk education and science (all while drinking beer of course). But I digress...

Having these two in town has given me the opportunity to continue to participate in research as I have a full teaching load and not much time or the specialized equipment to do it at the college. So, Phil and I sat down one day to come up with a scheme for us to go skiing on Fridays ... wait, to do research on Fridays. We put a small project together and I was given a generous course release to spend my Fridays looking at and learning about brain blood flow. We had some fun and during this time I heard about the Everest expedition. I remember it clearly. There was a white board in Phil's office with a bunch of names on it; however, mine wasn't! So, I calmly wrote in my name when he was out of the office and low and behold, it never go erased! At the time I wasn't sure what I could bring to the expedition, given I wasn't a brain blood flow guy or vascular guy or sleep guy, but I offered up my body as subject A1 (this means, do whatever you want to me, try things out, whatever, as long as I get to come). So, we hatched another scheme to submit for some release time and some funding for me and again the college came through again. I should also mention that my wife came through as she encouraged me all along the way. I didn't even have to pull out the idea of "if you let me go I'll be gone for 6 weeks, but if you don't let me go I pout for my entire life". THANKS BABE!

I wasn't sure what I'd be getting myself into, but so far it's been some fun science, some sleepless nights and some great friends.

I'll add some more in the coming days about what's been accomplished so far and how things are coming together for our departure on April 21st.

Needless to say an opportunity of a lifetime! 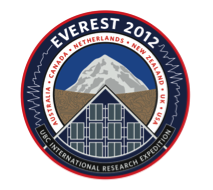